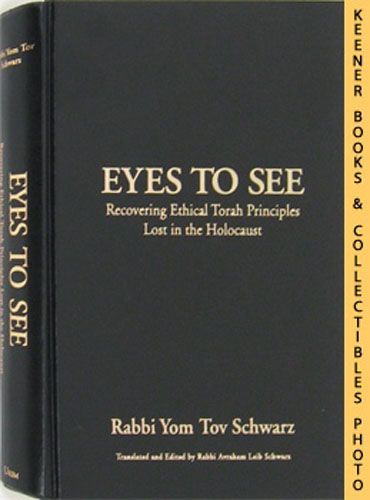 012509: This copy does NOT have a Dustjacket with it. Scarce, Out Of Print, Book. BRAND NEW, but book does have small black remainder mark on bottom edge of page block. "This book was written with the goal of restoring integrity, compassion, unity and Kiddush HaShem to their central role in the observance of Torah and mitzvos, as Halacha demands. This will serve to correct a number of serious errors and misconceptions of Torah views, values and obligations that resulted from annihilation of nearly all of the great European Torah leaders in the Holocaust. This destruction left a young generation of bereft and bewildered survivors without the great Torah personalities necessary to educate and impress upon them the absolute centrality of these traditions and laws for correct Torah observance. This book is a courageous call by the author, a leading ultra-Orthodox sage, for fundamental change in the Torah-observant community. In it, the author calls for the abolition of a dangerous new phenomenon - the tendency among various Orthodox groups to establish their own insulated networks of schools and other institutions - because divisiveness and discord are a natural consequence of this factionalism within Jewish society. He implores Orthodox Jewry to designate a fast day in remembrance of the Holocaust, as indifference to the greatest tragedy in Jewish history can only sow cruelty and breed immorality. The author also calls upon Orthodox Jewry to re-assess the manner in which they relate both to non-religious brethren and non-Jewish neighbors, highlighting the Torah's command that they be compassionate and honest with all people, and that they strive to glorify God's name and bring honor to the Torah by the manner in which they behave in even the most mundane of aspects of everyday life.": Remainder: 6.75 x 9.75 in.: 502 pages