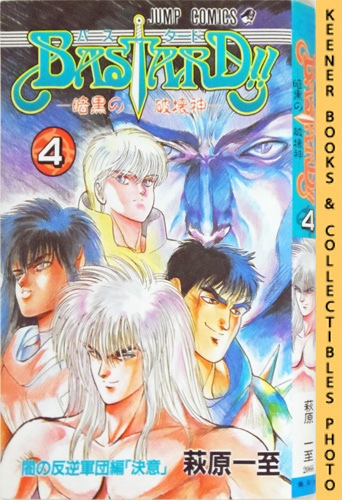 012744: Volume 4. Text is in Japanese. Book is softcover enclosed in original dustjacket. Dustjacket, covers and pages are clean, unmarked, bright, tightly bound and sharp cornered. Scarce, Out Of Print, Book. If interested, we have several other volumes in this popular Manga Series. "The Thunder Empress * Fighter/wizard Arshes Nei, the former lover of Dark Schneider, steps forward to attack him! And there's more than bitterness and revenge fueling her goal to kill D.S. - the dark priest Abigail has forced her to kill him, or Abigail's curse will turn her into a toad!" "Bastard is acclaimed for its mix of striking artwork, sexy characters, and graphic storytelling. The kingdom of Metallicana is under siege by evil armies of monsters. The desperate defenders turn to a legend that a virgin's kiss may awaken the wizard "Dark Schneider" from his slumber inside the innocent boy Lucien. Thanks to his sister Yoko, Lucien metamorphoses into the powerful, lecherous wizard. With demons, dragons, and other dark forces roaming the land, and Dark Schneider barely under control, the question remains: will Metallicana ever know a lasting peace?": Vol. 4: B&W Illustrations: 4.5 x 7 in.: 203 pages