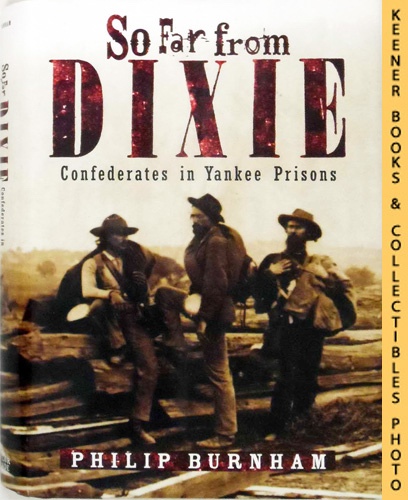 So Far From Dixie : Confederates In Yankee Prisons

012456: Bookjacket/dustjacket now protected by a New Brodart Mylar Cover. Boards and pages are clean, unmarked, bright, tightly bound and sharp cornered. Scarce, Out Of Print, Book. Stated First Edition. "Across the North, 26,000 Rebels died in what was called 'Yankee captivity' - six times the number of Confederate dead listed for the battle of Gettysburg, and twice that for the Southern dead of Antietam, Chickamauga, Chancellorsville, Seven Days, Shiloh, and Second Manassas combined. 'If there was ever a hell on earth,' one Confederate veteran remembered, 'Elmira prison was that hell.' New York's POW camp - nicknamed 'Helmira' - was the most infamous of Northern prisons during the Civil War, places where hunger, brutality, and disease were everyday hazards. 'So Far From Dixie' is the gripping narrative history of five men who were sent to Elmira and survived to document their stories.": 6.25 x 9.25 in.: 320 pages

Title: So Far From Dixie : Confederates In Yankee Prisons

So Far From Dixie : Confederates In Yankee Prisons