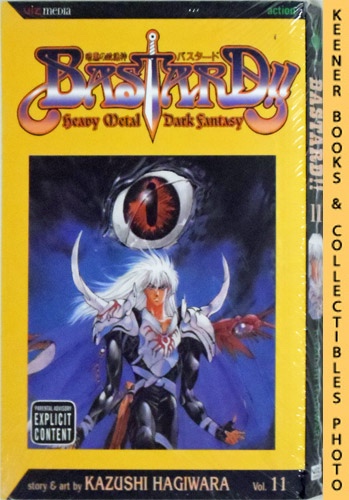 011426: Volume 11. Book is in As New condition and still sealed in original plastic. Covers and pages are clean, unmarked, bright, tightly bound and sharp cornered. Scarce, Out Of Print, Book. If interested, we have several other volumes in this popular Translated-Into-English Manga Series. "D.S. vs Kall-Su * High above the war-torn earth floats a sky castle preserved by ancient techno-magic ... the Glorious Crimson Kingdom of the Elves. Here, a few defenders guard Princess Sheila, whose body contains the last seal preventing the resurrection of Anthrasax, God of Destruction !" "Bastard is acclaimed for its mix of striking artwork, sexy characters, and graphic storytelling. The kingdom of Metallicana is under siege by evil armies of monsters. The desperate defenders turn to a legend that a virgin's kiss may awaken the wizard "Dark Schneider" from his slumber inside the innocent boy Lucien. Thanks to his sister Yoko, Lucien metamorphoses into the powerful, lecherous wizard. With demons, dragons, and other dark forces roaming the land, and Dark Schneider barely under control, the question remains: will Metallicana ever know a lasting peace?": Vol. 11: B&W Illustrations: 5 x 7.5 in.: 208 pages