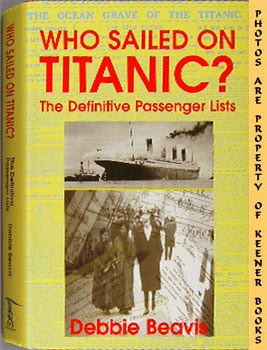 Who Sailed On Titanic? (The Definitive Passenger Lists)

007536: Dustjacket now protected by a new Brodart Mylar Cover. Dustjacket has small well-repaired cut at edge of DJ. Scarce, Out Of Print, Book. "The search for the definitive passenger list of Titanic has consumed researchers for 90 years. Lists marketed under various names invariably prove to be compilations drawn from several sources, often perpetuating earlier inaccuracies and with no citations whatsoever. Numerous lists of passengers' names were compiled before and after the tragedy by shipping lines and government departments on both sides of the Atlantic. Now here for the first time, is the full story - the result of a decade of painstaking research throughout the world. ": 6.25 x 9.25 in.: 302 pages

Title: Who Sailed On Titanic? (The Definitive Passenger Lists)

Who Sailed On Titanic? (The Definitive Passenger Lists)