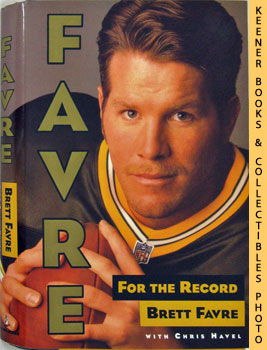 Favre: For The Record

006925: Dustjacket now protected by a new Brodart Mylar Cover. Stated First Edition. Printing Number Line (10 9 8 7 6 5 4 3 2 1) . Scarce, Out Of Print, Book. "Superstar (Ex-) Green Bay Packer quarterback Brett Favre has the arm of Dan Marino, the agility of Steve Young, the field presence of Joe Montana and the brashness of Jim McMahon. Born the son of an indomitable high school football coach in hardscrabble Kiln, Mississippi, Favre has gone on to become the NFL's most valuable player two years running (a feat equaled only by the legendary Joe Montana) and, after twenty-nine years, has brought the Lombardi Trophy back to Green Bay, Wisconsin. Favre has also paid dearly for his devotion to the brutal game of professional football. Priding himself on his ability to withstand incredible levels of physical pain and to continue playing when most players would head to the sidelines, Favre admitted last year to a dependency on Vicodin pain killers. But he faced his problem like he faces opposing defensive linemen, head-on, and voluntarily admitted himself into the Menninger Clinic in Topeka, Kansas for drug counseling. In Favre, Brett shares portions of his daily journal written during treatment and will reveal just what it took to break a debilitating habit. In the end, readers will be inspired by this small town son's sacrifice and struggle to make it to the NFL, his unwavering commitment to honor his profession, and his perseverance to realize his dream on his own terms. ": 6.5 x 9.5 in.: 288 pages

Title: Favre: For The Record

Favre: For The Record