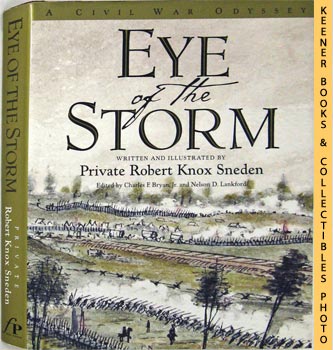 Eye Of The Storm (A Civil War Odyssey)

006519: Dustjacket now protected by a new Brodart Mylar Cover. Scarce, Out Of Print, Book. "One of the most important Civil War documents to be published since Ulysses S. Grant's Personal Memoirs. In 1994, four tattered scrapbooks were found in a Connecticut bank vault, yielding a treasure trove of more than five hundred watercolors that vividly depict America's greatest national drama. These scrapbooks -- plus a five-thousand-page illustrated memoir that was also discovered -- are the life's achievement of a long-forgotten Union private and mapmaker named Robert Knox Sneden. Sneden enlisted in the Union army after the fall of Fort Sumter. As a soldier and mapmaker, he witnessed many of the most famous battles of the war. His map of the second battle of Bull Run offers a detailed firsthand account of this pivotal moment. Captured by the notorious Captain Mosby in 1863, Sneden spent most of the rest of the war as a prisoner at the infamous Andersonville prison camp. Sneden's chronicle is one of the richest descriptions of soldier life and the only fully illustrated eyewitness account of existence inside this notorious prison. A must-have for anyone interested in the Civil War, Eye of the Storm is a story that will touch the heart of every American. ": 8 x 9.5 in.: 329 pages

Title: Eye Of The Storm (A Civil War Odyssey)

Eye Of The Storm (A Civil War Odyssey)