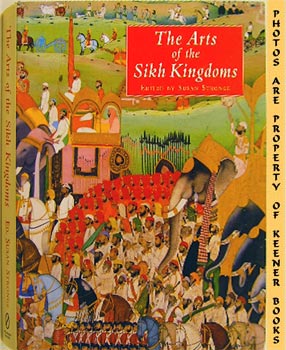 The Arts Of The Sikh Kingdoms

004807: Dustjacket now protected by a new Brodart Mylar Cover. Lightly worn sticker spot on inside of front cover and dustjacket has small worn spot on back near spine. Price INCLUDES FULL EXTRA COST of Media Delivery. USPS Priority would be an extra charge. Scarce, Out Of Print, Book. "In 1801 Ranjit Singh was proclaimed the first Sikh maharaja of the Panjab, the 'land of the five rivers', at Lahore. The magnificent illustrations include jewellery and gemstones from his treasury and the paintings, luxurious textiles, gold-decorated weapons and armour of his reign. The book also tells the little-known story of the continuing tradition of the later Sikh kingdoms after the Annexation of the Panjab by the British in 1849, as well as the beguiling friendship between the deposed Maharaja Dalip Singh and Queen Victoria. ": Photographs: 10 x 11.5 in.: 256 pages

Title: The Arts Of The Sikh Kingdoms

The Arts Of The Sikh Kingdoms